In his latest column for Motorsport.com, Felipe Massa looks back at Williams’ impressive Austrian GP turnaround and raises the matter of on-track respect between drivers.

Formula 1 is often unpredictable. Within two weeks of finding myself in the hunt for a victory in Baku, I was starting from the ninth row of the grid at the Red Bull Ring. And then, just as it seemed the weekend would be a write-off, Williams Martini Racing produced a great comeback race to get both cars in the points!

We had brought many aerodynamic developments to Austria, and when there are major changes on a single car, the first reaction when you hit problems is to start pointing fingers at the new stuff.

That was exactly what I thought after the first free practice session, after encountering great difficulties in using new tyres. In the end, the telemetry data showed that that the updates were producing on track exactly what we were expecting.

So in the afternoon session, I went out on track without the latest updates fitted, and things did not change much from the morning: we just couldn’t get the new tyres to work.

There was more positive feedback from the race simulation though. With used tyres the performance was exactly as we had hoped for – but unfortunately that wasn’t going to help us get a good qualifying position. My teammate Lance Stroll and I found ourselves on the ninth row with the prospect of an uphill struggle on Sunday.

Starting from 17th position, I decided to try something different on the strategy front and begin the race on the soft tyres. And immediately the race began in exactly the right way.

I made a very good start and above all else I was able to avoid the chaos that happened as everyone hit the brakes at the first corner. Lap after lap I was able to climb the rankings, and the pace was exactly where we should have been – close to the Force India.

Eventually we came home in ninth place – something that certainly we could not have predicted after Saturday.

A matter of respect

The Red Bull Ring track is very short, and in the final stages of the race the leading drivers were right behind me.

When you find yourself in these situations, I think it is necessary to have respect, and I have always tried to make no difference to the races of those who are fighting for something very important.

But not everyone behaves the same way. I spoke with Fernando Alonso on race morning during the drivers’ parade, and he told me that in IndyCar he found a greater group spirit among drivers.

Some of the motivation for that may come because of the greater danger the drivers in that championship encounter when they go out on track, but I think, in the end, it is a question of respect – and I see that the new generation of drivers in F1 have a little less of it.

There are obvious exceptions, but maybe it’s no coincidence that Alonso and Kimi Raikkonen have zero disciplinary points, and I have just the two for passing the pit entry line last year in Brazil.

Next up is a very important weekend for everyone at Williams. The British Grand Prix will have a special flavour and it is the ideal venue to celebrate the 40th anniversary of the team – especially in front of the home crowd.

I’m honoured to be part of the history of this team, and I think that there will be a very special atmosphere this weekend.

I am convinced that at Silverstone, a track with a very different asphalt and configuration to the Red Bull Ring, we will not struggle with the problems we had last weekend.

And it would be great to give the team a good result on such a special occasion. 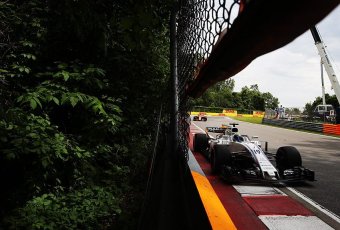